Our Community > Our History

The Seattle First Church of the Brethren was established in 1903 and built its meetinghouse in the Greenwood neighborhood.

In 1948, the congregation built a new meetinghouse in Maple Leaf and became the Olympic View Community Church of the Brethren. 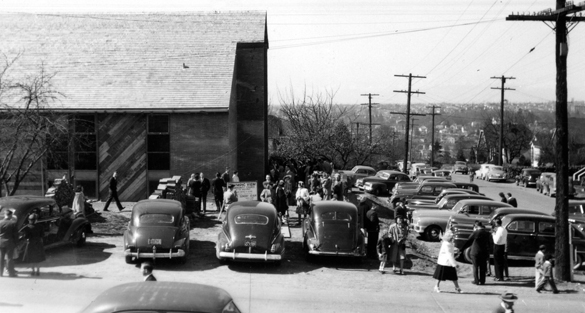 In 1971, Olympic View sponsored the Northaven Retirement Community, a non-profit, low income residential housing complex just north of Northgate Mall.  In 1992, Northaven II was developed as an assisted living facility to provide residents a continuum of housing options.  We are a small and friendly congregation of approximately 120 members and an average worship attendance of 75.  Our multi-generational congregation comes from a variety of religious and ethnic backgrounds.

We have recently upgraded the accessibility of our facility: we have wheelchair access for both levels of our building.  During Sunday worship we provide large-print bulletins and song books; we also offer assistive listening headsets and (ASL) sign language interpretation for the hearing impaired.

We welcome everyone to the joys and responsibilities of discipleship regardless of gender, race, nation of origin, mental or physical challenges, sexual orientation, or any other diversity we may have.

Church of the Brethren History

The Church of the Brethren was established in 1708 by German Anabaptists dissatisfied with the coercion and corruption of the state church.  Exiled to Holland, they followed William Penn’s invitation to settle and practice their faith in the New World.

First known as ‘Dunkers’ for their practice of full-immersion baptism, the first group emigrated to the English Colonies in 1719, with most others sailing from 1729 to 1735.  They settled in Pennsylvania, mostly to farming, and established their first meetinghouse in Germantown, near Philadelphia.  Though small in number, their presence made an impression on at least one of our nation’s founders.

Benjamin Franklin on the Dunkers:

The following excerpt from Franklin’s autobiography relates his impression of two pacifist religious sects, the Quakers (Religious Society of Friends), and the Dunkers (Church of the Brethren).

These embarrassments that the Quakers suffer’d from having establish’d and published it as one of their principles that no kind of war was lawful, and which, being once published, they could not afterwards, however they might change their minds, easily get rid of, reminds me of what I think a more prudent conduct in another sect among us, that of the Dunkers. I was acquainted with one of its founders, Michael Welfare, soon after it appear’d. He complain’d to me that they were grievously calumniated by the zealots of other persuasions, and charg’d with abominable principles and practices, to which they were utter strangers. I told him this had always been the case with new sects, and that, to put a stop to such abuse, I imagin’d it might be well to publish the articles of their belief, and the rules of their discipline. He said that it had been propos’d among them, but not agreed to, for this reason: “When we were first drawn together as a society,” says he, “it had pleased God to enlighten our minds so far as to see that some doctrines, which we once esteemed truths, were errors; and that others, which we had esteemed errors, were real truths. From time to time He has been pleased to afford us farther light, and our principles have been improving, and our errors diminishing. Now we are not sure that we are arrived at the end of this progression, and at the perfection of spiritual or theological knowledge; and we fear that, if we should once print our confession of faith, we should feel ourselves as if bound and confin’d by it, and perhaps be unwilling to receive farther improvement, and our successors still more so, as conceiving what we their elders and founders had done, to be something sacred, never to be departed from.”

This modesty in a sect is perhaps a singular instance in the history of mankind, every other sect supposing itself in possession of all truth, and that those who differ are so far in the wrong; like a man traveling in foggy weather, those at some distance before him on the road he sees wrapped up in the fog, as well as those behind him, and also the people in the fields on each side, but near him all appears clear, tho’ in truth he is as much in the fog as any of them. To avoid this kind of embarrassment, the Quakers have of late years been gradually declining the public service in the Assembly and in the magistracy, choosing rather to quit their power than their principle.

[under construction: more to come]

For more history of the Church of the Brethren, you can visit our denomination’s history page.